Thought it would be fun for the kids to see their epic finale from module U2 in story form. So here goes...

***
The hesitant dawn tainted the mists a rusty colour. Despite the early hour the marshland had a stifling closeness, the air seeming dense and obstructive. Progress from the Lizardmen’s lair had proven sluggish, and the stinking water had soaked through Emelia’s boots at least an hour ago.


She glanced at her companions as they fanned out nervously at the edge of the large pool. Long sharp grasses mixed with twisted reeds around the fringes of the murky water, thickening into a copse of slimy trees at the far side. The creature was surely in the water, yet Emelia had an uneasy sense something terrible was watching them from the dark of the wood. 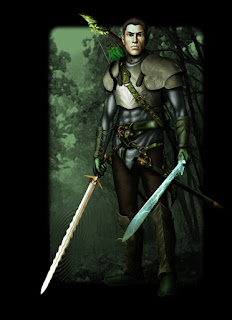 “Stay vigilant,” Loki said. The ranger crouched low, checking the mud around the pool for signs of their quarry.


“Can’t be too hard for you to track a crocodile the size of a house,” Crue, the elven mage chuckled. Loki frowned but did not reply.


“I do declare, it might have been safer to just give the Lizardmen their gold back,” Gideon said. The cleric of Pelor was clasping his holy symbol nervously.


“My spell books don’t pay for themselves,” Crue said. “And besides, we took that gold in good faith before we realised the Lizards’ true intent.”


“We have much to compensate for,” Loren, the Paladin, said. “At least this way we slay the…”


The brackish water erupted as a huge crocodile burst forth. Its speed belied its vast bulk, as its huge mouth roared in fury. Slime glistened on its thick green hide, tendrils of weed hanging from its underbelly. 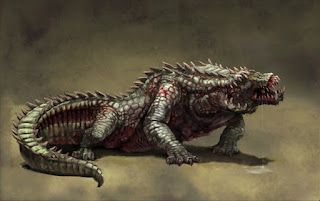 Emelia’s heart was in her mouth as she sprinted to the side, mind desperately trying to recall a spell that would be of use against such a monster. To her left se could see the huge half-orc, Vicdac, take a more traditional approach and charge in with his sword.


The crocodile sloshed out of the pool, its massive tail swinging through a splintering hail of reeds. Vicdac’s massive sword carved a vicious furrow along its side and dark emerald blood mixed with the slime and marshwater. To the creature’s far side the spear of Oceanus, the Sea Elf, plunged into the crocodile’s flank.


Words of sorcery spilled from Emelia’s lips and she felt the surge of power as a crimson bolt crackled forth. It struck the beast under its jaw in a cascade of sparks. The crocodile focused its attention on Emelia and she felt a surge of terror.


“Try this for size,” Crue yelled from behind a nearby tree. The marshland glowed with the nimbus of sorcery around the elf, and a magical arrow hurtled across the waters and into the monster’s flank. There was a glare of light and then a horrid hiss as acid devoured a chunk of flesh.


I need to find the creature’s vulnerable area, Emelia thought as she darted around the fringe of the pool. Charging in from the front is hardly my style. I’m on this mission to crack locks and dodge traps.


The hide of the crocodile was as tough as iron, and despite its wounds it had slowed little. With a mighty lunge its huge jaws clamped around Gideon as his swing with a mace skittered off its head. The cleric screeched as the dagger long teeth ripped through his armour. Emelia watched in horror as blood spattered across the companions—Gideon’s blood.


“Get him loose,” Loki yelled, jabbing at the crocodile’s throat. “We can still save him.”


Oceanus charged with his spear, and straight into the crippling impact of the crocodile’s tail. The blow sent him hurtling across the water and into a tree with such impact the trunk splintered.


“No!” Emelia screamed, and dashed around the pool. The mud clutched greedily at her boots. To late she saw the trees part and a far more terrible creature emerge.


The water of the pool erupted into flames, and Emelia threw herself back. Her uncanny reflexes had saved her vicious burns from the mystical flames.


A creature of legend emerged, its vast snake like coils propelling it towards the companions. A wicked set of teeth leered as burning orange eyes narrowed in hatred. Crimson membranes glowed with power between gnarled spines jutting from its draconian head and back.


A dragon. A coiled dragon. Emelia knew of such creatures only from the dusty tomes of Ulek’s famed library.

Oceanus had stumbled to his feet, wincing in pain and lowering his spear. Glancing back, Emelia saw that Elangos, the dark skinned warrior, and Vicdak, had also seen the dragon emerge.


The persistent jabbing of weapons had prompted the crocodile to drop Gideon’s limp body. In a deft motion, Loren caught his mentor, whilst stabbing ineffectively at the roaring crocodile.


The heat from the flames was unbearable, and Emelia knew she would be better in the cover of the reeds than stood with wavering sword before a dragon. She scuttled through the reeds almost colliding with Crue, who was skulking like a thief in cover.


“I’ve got some left, but the acid arrow almost burned me out. If I’d have known…”


“Easier to scowl at the past than smile at the future,” Emelia said. “This battle is more suited to bruisers like Loki and Vicdak.”


Circling above the pair, their familiars came into focus. The two pseudo-dragons had wisely being hiding in the reeds. The elves smiled grimly, and then allowed their own flesh and clothing to magically adopt the colour of the surroundings.


Even from three feet away, Emelia could hardly see Crue.


“Good luck, my friend,” Emelia said, and then scrambled through the reeds.


The crocodile was trying to bite Loren, but the paladin’s ornate plate mail deflected the attempts. Loki had moved around towards the dragon, with Elangos and Vicdak, but the flames were hard to breach.


Through the reeds, Emelia crept, trying to anticipate the swing of the huge tail. Her hands were so sweaty with fear that she feared she’d drop her sword. The flicker of flames from the nearby water danced across the flawless elven metal.


With a clatter the huge tail slammed into Loren. The magical plate armour dulled the blow, yet it sent the paladin staggering. The crocodile reared to attack, and Emelia knew she had one chance.


Hurtling from the reeds, she plunged her sword into the soft belly of the crocodile and threw all her strength behind the blow. A gout of viscous blood and entrails spilled from the wound, and she kept on moving, dragging her keen blade along the length of the abdomen.


The monster thrashed and gurgled and then crashed to the mud. The impact sent Emelia spinning across the marsh and into Loren. The pair splashed into the swampy ground and then lay laughing in relief.


“Some help…?” Vicdak’s guttural voice echoed across the marsh.


The dragon hissed in pain as a magical bolt arced from the reeds and into its neck. Loki was injured, but still fighting through the flames at the dragon. With horror, Emelia saw the injured Oceanus, staggering in the flaming pool, trying to thrust his spear at the monster.


There is so much I could learn from him, she thought. Erevan help us, throw your fickle dice our way for once.


The dragon snapped down at Elangos, ripping a chunk of flesh from his shoulder. The dour warrior splashed back through the water, as Vicdak hacked furiously against the dragon’s impervious hide. The battle was taking its toll on the companions, and the dragon showed little sign of fatigue. 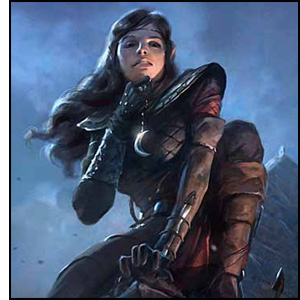 Elangos had retreated to the water’s edge and was aiming his crossbow. There was something about the dark-skinned half-elf that Emelia couldn’t fathom. Yet she had met few warriors from the northern fringes of Tenh, and those she had were soured by the constant battles in the region with barbarians and orcs from the lands of dreaded Iuz.


Urging her aching muscles to action, Emelia hastened over to the unconscious cleric, Gideon. They had been good friends since meeting years ago in their homeland of Ulek. Although Gideon and Loren worshipped Pelor, God of Light and Healing, and Emelia considered her patron gods, Erevan Ilesere, Elven deity of mischief, and Boccob, human god of magic. Yet Pelor’s disciples were ever tolerant of other faiths, especially when working for the common good (which naturally Emelia did… most of the time).


Blood ran from Gideon’s mouth and nose, and his chest excursion was uneven. Swiftly Emelia tugged loose a vial of potion and carefully poured the contents into the cleric’s mouth. He gagged and spluttered, and was then surrounded by a shimmering light. His eyes flickered open.


“I declare, the dawn has nothing to compare to your fair visage, mah dear.”


“You’re fine,” Emelia said, and dropped Gideon’s head back into the mud with a splash. She stood,  winced, and retrieved her sword. Her friends would need her help, magic or no.


With Loren at her side, she rushed forwards. The dragon was wounded, the water bubbling ferociously around it as the heroes splashed across the muddy banks. Loki was retreating, multiple cuts dirty with swamp water. Oceanus had slumped on the bank, and the flames licked greedily at his burned legs.


A shrill sound sprang from Elangos, an ancient Flan war-cry that sent shivers down Emelia’s spine. Some dormant memory arose within the dragon, and it turned its sinister gaze towards the dark figure on the edge of the pool.


The flames illuminated Vicdak’s mighty blade as he lunged forth. His huge muscles propelled the sword deep into the dragon’s throat, and he roared a prayer to Wee Jas as a fan of emerald blood coated his pale Suel features.


In a flicker the magical flames were gone, and the companions stumbled wearily before slumping into the marsh. Checking the coast was clear, Crue emerged from the reeds and retrieved the dagger he had thrown moments before. His camouflage faded, and he smiled spritely at his exhausted companions.


“Alright, maybe Gideon was right. Paying back the gold would have been an easier option.”


Emelia closed her eyes and smiled.