I can remember when I was a teen and getting big into music how excited I'd be about new releases. My mate Woodsy would fire me up and we'd nip out of school at lunchtime, bike down to town, and count out the 10p pieces to buy the new LP/12 inch/single. Downloads and CDs have never replicated that for me. I loved the covers as much as the music--in my earliest music loving years it was the album covers of Iron Maiden and Marillion that did it especially.

So it is with comparable enjoyment that I can unveil the cover for Darkness Rising Book Two- Quest. This is the second part of Volume 1 of the Prism series, and it boasts a fresh edit, a new prologue (with Torm) and an extended epilogue. I might post the extra material on the Nurolia website, for those who bought the original undivided Volume 1 which was available between Sept 11 and March 12. 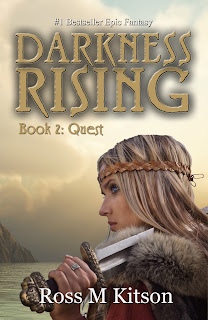 The cover was done by Ceri Clark, an author previously at FIBP. Ceri is independent now, but is doing some stuff with a new label called Myrddin (appropriate as she's Welsh!). She has a fantastic style and technique and we set out to make the cover link with that of Book One (Chained). Hence we used the same model, but altered the background and colour tone to make it distinct.

The full dustcover/ wrap around displays a coastal scene with a castle/city atop a rocky outcrop. This is representative of Goldoria City, which is where the finale of the book is situated. The book begins with Emelia, wounded by the demonic humour being taken by Jem, Hunor and Orla to the sanctuary of Master Ten. En route they bump into some old acquaintances from Book One. A parallel story arc follows Aldred, Baron Enfarson's son, as he investigates both Hunor and the murder of a maiden in Eviksburg. 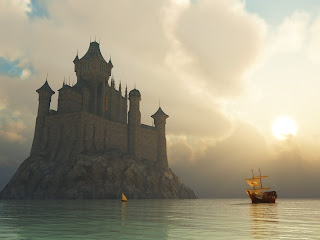 To me the real star of the book is Vildor, Lord of the Ghasts, whose scenes in the Dead City provide most of my quotes for Twitter's Sample Sunday. Having just written Prism book 5 (first half of volume 3) its great knowing where the story takes his character.

The book is pencilled for release in early August. I'll update on here, and on the World of Nurolia website here! Until then bask in the glory of Ceri's work, and check out her website at http://cericlark.com/
Posted by Ross M Kitson at 23:42 2 comments:

I’ve just finished reading the astonishingly good ‘ThreeHearts and Three Lions’ by Poul Anderson. It’s a book that was writtencontemporaneously to Tolkien’s Lord of the Rings, but unlike the rather sombreprose of the master it fair bounces along. The gags are funny, the charactersgreat and I can’t recommend it enough. Yet there was one bit of it that irkedme, and that was one of the character’s dialogue.

The character in question is a dwarf (Hugi) whom Holder, themain guy, picks up on the way. He’s a Scottish dwarf and, given this book setthe standard for many fantasy works since, I have no issue with that.Unfortunately the author writes his dialogue in mock-Scottish style. I cansense the cringing through my keyboard already. For example:

You get the idea! WTF? Or in Irish dialect ‘Wa thi feck?’Why on earth do writers do it? Throw in a little dialect, perhaps a fewcolloquialisms appropriate to the character, but whole speeches sounding likesomeone taking the piss? It brings to mind Dick Van Dyke’s attempts at aCocker-nee accent, which must have made the Kray twins put a bounty out on Dickback in the sixties. Or Russel Crowe’s unforgivable attempts at regionaldialects in the last Robin Hood romp, which were a whistle-stop tour of everyaccent in the . 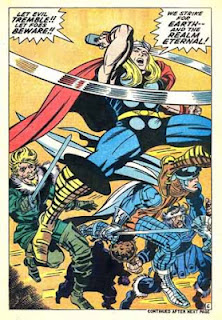 But you can kind of pardon films. Actors are, after all,human and not all are nutters like Gary Oldman (who insisted on specific voicecoaches for his eastern European accent in Dracula, and still sounded like a horror vampire). And it’s well acknowledged that most of the US think the UK islike a Sherlock Holmes film, all smog, cobbles and rowdy taverns (Halifax ISlike that, but most of the UK isn’t...). From authors, though, I expect adifferent standard. And for fantasy authors I expect the best. Why? Becausethose of us who write in it have to battle through years of prejudice againstit being a succession of Tolkien rip-offs, plump with dwarven singing, orcsa-chopping and wizards with pointy hats. And the mock-Shakespearean dialoguesdon’t help (my personal opinion is that only one character in the whole offiction can use phrases like ‘Forsooth’, ‘Verily’ and ‘Varlet’ and that isThor... no one else... ‘I say thee nay!’).

It’s like there’s a covert style-guide brought out by amateurauthors...

Step 1: add –eth and –est to verbs in a strangeunpredictable fashion. Geteth me?

No-one minds one or two, and to be fair it’s perpetuated bythe UK Touriste industry in places like and (Ye Olde Fucking Tea Shoppe, my Wife ofBathe sized-arse!). But authors really screw their books up with it. Wags likePratchett and Eddings mock its usage in their books
Oddly I don’t mind modern slang in dialogue, or evenreasonable use of apostrophes in regional dialect, or even use of the word‘feck’ in Roddy Doyle’s books. It’s the bogus medieval dialogue that reallygets to me. And pirates that say ‘Arrrhhh’ a lot (unless it’s in response to acannonball blowing their leg off).
So I’ll leave you with the classic sketch from Blackadder 2in which Lord Blackadder goes in search of the wise-woman....
Posted by Ross M Kitson at 07:00 8 comments: 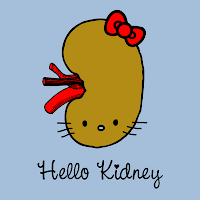 I was asked the other day why I didn't blog about serious stuff, you know, the sort of thing that I do at work. The answer's kind of obvious- that's work, that's what I do during the day, this is fun, this is what I do when I'm relaxing.

Nonetheless it did give me a thought, and that was 'What could I blog about related to work, the wouldn't be too gory, too boring, too technical or too confidential?'

Tough one. I split my time between Intensive Care (synonym 'Expensive Scare') which isn't renowned for laughs, and anaesthesia, which someone said is 99% boredom, 1% sheer OMG. I do have other stuff that I do, related to patient safety, management, education and so forth. And then it occured to me I could write a bit about organ donation.

Organ donation is a strange topic. I say this because it always reminds me how difficult it is to remember when I didn't know about something. Let me elaborate. Before I became a doctor I was a fairly astute kid. I watched plenty of TV, read a lot, was into science (and comics, and DnD, yeah, yeah, get to the point). What exactly, back then, did I think organ donation was?

I had almost no concept of what it entailed. I'd seen donor cards in the GPs surgery, and perhaps adverts in papers. I can recall comedy sketches about it (the bouncing heart in Airplane; the organ collectors in Monty Python's Meaning of Life). But what did it involve? Were these organs you donated when you were dead popped out days after? Weeks after? How were they put back in? Who actually needed them? 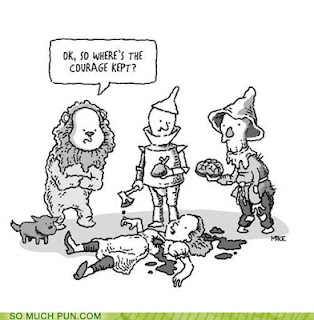 It's a very difficult thing as a doctor specialising in an area to try and think back to the days of not knowing what we know. It'd be the same for anyone who dedicates themselves to an area (whether law, education, IT, whatever). Of course, things are a little different now. In the 70s and early 80s computers were basic, and you had a homeopathic choice of TV channels. Books were the main source of info, which required forewarning and access. Now even the 10 year olds have smart phones, and Google has a frightening amount of power. Patients are far more informed, irrespective of social class and intellect. It makes the job bothe easier and harder when you are discussing topics like organ donation with them, because information doesn't always come with quality controls!

My first real experience of organ donation was as a registrar in Birmingham, about a decade ago now. Prior to this I had a mixture of ignorance and indifference, not really being aware of the benefits. In a sense I thought there was a ghoulish-ness to the process. Then I worked on a paediatric ICU, followed by  liver and cardiac ICUs, and saw the patients in need of transplants. It's one thing to be told statistics; it's another thing entirely to see an eight year old dwindling day on day praying for a liver transplant.

So now I'm the Clinical Lead for organ donation at my small trust in Manchester, and its part of my job to try and raise awareness in the hospital about it. Because most doctors are like I was pre- my experience in Birmingham-- a little bit indifferent and a little wary. And if doctors are like that, you can see why the average Joe is even more so. About 30% of the UK population is on the Organ Donor Register, and about 800K join each year. Soberingly in the UK there are almost 8000 patients awaiting a transplant, ten times that in the USA. Most of these are kidney transplants.500 people die each year in the UK whilst waiting, of all ages. About half of donations in the UK come from living donors (kidneys obviously) which is an amazing figure.

But these are numbers, and seeing the benefit of transplants, I can say that I'm really pleased that my career has taken me in that direction. It's an amazing thing to be part of.

Serious post over... click on the link if you wanted to find out more about transplants and donation in the UK here or in the US right here.


Next time I'll be back into the realm of fantasy, but in the interim here is one of the comedy clips on how it DOESN'T HAPPEN (and feel free to contact me if you wanted more info on any of the above).