On Facebook I’m in a zillion and one groups, mainly because people practice stealth grouping wherein I seem to be added to groups without my noticing. I had a cull of late, where I went and removed myself from pointless ones, and kept the ones where I had at least a modicum of interest. Some are straight promo ones, whereas others are ‘book clubs’ (promo ones interspersed with occasional debate... and links...). 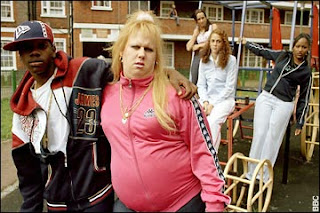 One group is a YA book group, which I think I joined by virtue of one of the admins being someone I knew. Initially I thought, well I don’t write YA but I have read some of what I consider YA, and have been made to sit through movies and TV series based on YA paranormal romance. So I stuck with it, and the other day read a really great thread on a YA writers work getting chopped off some award nominations because of sexual content.
It got me thinking about the genre, not least because since I joined the group I’ve written a book targeted at teens. It came about because the oldest two kids (Charlie, 10 and Evelyn, 8) wanted a book by me that they could read without falling asleep or reaching for a thesaurus. So I wrote one. And now I’m thinking, what ‘category’ should it fall into?
Literature is getting like music with its genres/styles, and like the cinema with its censorship/age classifications. In t’old days life was fairly simple, or so I thought. We had books for kids (Dr Who books, CS Lewis, Winnie the Pooh, Enid Blyton) and books for grown-ups (the rest). We also had ones written for kids that adults liked (what are now called cross-over books). The idea there was kids books for older kids that weren’t suitable for young ‘uns never really occurred to me. This was probably because by the time I was a teenager I was reading adult ones (mainly fantasy, sci-fi) and chuckling at any rude bits.
But there was a definite teen-literature market even then. Books such as Catcher in the Rye, with its teen protagonist, was a popular book amongst angst-saturated teens and the Outsiders, by SE Hinton, really got the ball rolling in the Sixties, not least because Susan Hinton was a teenager when she wrote it. I remember the film, with its plethora of brat-packers, and its depiction of gang fights, smoking and drinking, and swearing. Not surprisingly it was a perfect YA book, as it didn’t patronise its audience.

I think as a male geek-nerd of the first order I missed out on the YA evolution in the Eighties. I recall the Flowers in the Attic by VC Andrews being popular, but I was never clear whether that was a book for teens or one for adults that teens read. And herein is a curious dilemma. Is the whole idea of YA a little patronising?
YA is targeted at teens: the common age range is described as 12-18. The bottom end is often overlapped with another genre, middle-grade, which I think is kind of 10-12/13 ish. I find it fascinating when I think of the maturation of adolescents between 12 and 18 just how anyone could think there is a book whose themes/contents would be relevant or appropriate for the whole group. I suppose what I’m pondering is the content, and what is acceptable for MG, for YA and what is adult?
When we boil it down I think we’re looking at language, as in expletives, sexual content and violence/horror. Even the bottom (MG) end of the market is happy with violence. Take Harry Potter: we have plenty of scraps, some torture, bits of murder, death, snakes eating wizards. I read Conan as a 10 year old and loved splattering viscera. The reality is that kids won’t bat an eyelid at most violent content, within reason. Acceptable violence in YA? I think of a 15 film: a bit of splatter, spurting vessels, guns, swords, but not full anatomical gore and torture.

Expletives? That’s tricky too. Teenagers are the worse swearers on the planet, as they think it’s cool. What’s OK for expletives in the books they read? I suppose its volume, rather than precise usage, and also whether it’s appropriately put in versus put in to titillate. For my part, I don’t tend to put cussing in my books, even the adult ones!

And then finally we come to sexual content. As a father, this is the one I struggle most with as I’m probably in denial about the whole issue. Teenagers at my high school, even in the Eighties, were obsessed with sexual themes. By the time most were 14-15 porn had crept into lives, 18 rated sex scenes were passed around on video-tape, and a few were already practising them. And since then we have the internet, and kids with laptops and locks on their bedroom doors. The reality is that what we consider too rude for kids isn’t probably a scratch on the surface compared to what they’re reading or watching. Which isn’t to say we should condone or advocate it in our literature. I think its all down to context, isn’t it? Pointless, exploitative, overly detailed erotica hasn’t really got a place in YA books IMHO. Intimate scenes, sex scenes which are relevant to characters/relationships/plots, are surely OK in our YA books? Other aspects of sexuality, such as homosexuality should definitely have a place. Perhaps even sexual crime (incest, rape) may be acceptable if written in an appropriate fashion. We do our teens a disservice by shying away.
Now, having said all of that, just because we can doesn’t mean we have to. Books like Philip Pullman’s His Dark Materials, Harry Potter, Philip Reeves’ Mortal Engines, The Hunger Games and Cirque du Freak are tame by the above standards yet read by adults. My book, with its group of teens being chased by killer androids, touches on some mature concepts of identity, self-worth and mental illness, but in a manner I think puts me in the MG category akin to Reeves, and Rowling. And I’m happy being there—with no cussing, shagging or decapitation.
Until the sequel.

A Gathering of Dust 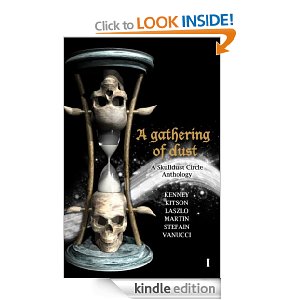 I think I mentioned a while ago that I had written a short story for an anthology with the guys from Skull Dust Circle. Well, it's been published today, and it looks to be all shades of awesome! Gary Vanucci, our Emperor, has put together the book and the cover, and written a story that acts as a historical prequel to his mega-DnD-esque series, Wothlondia Rising. The artistic William Kenney has also done a story set in his fantasy world. I've recetnly read his first book, A Dream Of Storms and it blew me away (storm jokes aside). The third author is Jeremy Laszlo, who was the first guy out of the Circle i befriended, and who has completed his trilogy (The Blood and Brotherhood). The other two guys, Ben and Stefain, I have yet to read and i think the book will give me excellent opportunity to get introduced to their work.

My story? It's a short about two of my characters, Jem and Hunor, and how they started off on their path as rogues and thieves. Lots of actions, a few laughs... you know what to expect if you've read any of my stuff!!

Back to normal posts next time- something about Young Adult books that's been playing on my mind. 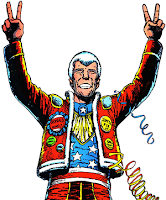 My first exposure to Harry Harrison's writing was actually via an adaptation of his work for the UK sci-fi comic 2000AD. The Stainless Steel Rat appeared in issues in the late seventies early eighties, written by Gosnall and drawn by Carlos Ezquerra (who drew Jim like James Couburn). It was quite different to a lot of 2000AD stories, as it captured the irreverent humour of Harrison well, and I loved the idea of a space-age thief (because let's face it we all wanted to be Han Solo, not Luke Skywalker).

A few years later, when I started to read a bit more sci-fi (mainly Heinlein) I decided to try the SSR books, and from there got into Deathworld, Bill the Galactic Hero, and the Eden books.
Harrison was a skilled writer. His style was easy to devour, avoiding the pomposity of many sci-fi writers and he managed to write humour without deriding the genre. I found it interesting that Harrison's origins were in the comics field- he was an illustrator and a writer of syndicated comic strips in the 1950s.

Deathworld was Harrison's first SF novel. It was originally serialised, as were many of the fantasy and SF books of that era. Its hero, Jason dinAlt, is a typical Harrison rogue--he is a gambler with some psychic ability--and he meets and accompanies Kerk Pyrrus to the planet Pyrrus (the Deathworld of the title). When I read the book first time I was blown away by the mixture of action and humour that typifies Harrison's work. Harrison wrote three Deathworld books in the sixties, but it was the Stainless Steel rat series that produced the greatest output.

After discovering them in 2000AD I read the first seven books through the 1980s, four of which had been written when i got into the series, and three after (SSR for President, SSR is Born and SSR gets Drafted). The decision to write SSR books about Jim's youth was a great idea, in my opinion, as the series was turning into a little of a family affair by the fourth book.

Jim DiGris was a perfect anti-hero. He was a moralistic thief and con-man who abhorred killing, justified his thievery by saying it provided the galaxy with something to talk about, and was dedicated to his missus and kids. His love, Angelina, has less compunctions about bumping people off. The concept of the Special Corps (a group of largely ex-criminals who now fight crime) formed the basis for the early books, and highlights Harrison's love for the rogue in SF.

Harrison lived until 87, which is fair going, and its hard to be too sad about his passing as he leaves an astonishing catalogue of work behind. I'm planning to catch up on the SSR books that I never read, and indeed the Bill, Galactic Hero sequels. There are so many books and so little time! 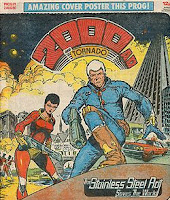