a quick word from our sponsors...

Its a rarity that i get to the cinema these days. With three kids with divergent ages its difficult to find common films, and when me and t'wife get some time off together the last thing we want to do is sit in a dark room with dozens of people eating popcorn in our ears and not be able to talk (yes, we still talk after 14 years of marriage).
So it was quite a treat the other day to drop the titchy one at pre-school and take older two to the flicks. Now I'd hoped a decent superhero movie was on but, and this must be a rare hole in the scheduling, there was none! We must be post-Xmen and pre-Guardians at present. So the next best choice was the new Transformers movie, which is a sort of reset to the series wherein we get some new fleshy stars alongside the same bunch of robot aliens. 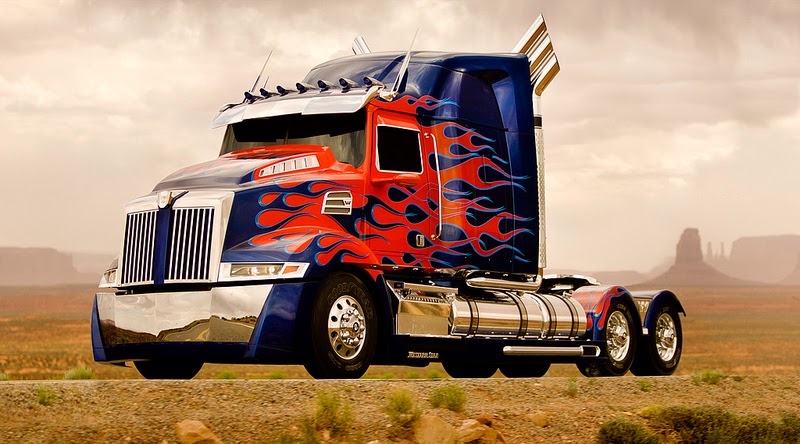 All in all it was a good laugh--a little long, rather too many almost finales and trying to man itself up by saying 'sh1t' a whole lot--but with great action scenes and amusing characters. I'd not seen Transformers 3, but that did;t really matter as i got the plot in about 5 minutes anyway.
But beyond all else, the lasting impression for me was the in your face product placement in the movie. Seriously it was as subtle as a blowtorch on your testicles. There's a few subtle ones to start with--bottles of Bud on trays of food etc--and then 'boom' a lorryload of Bud Lite with bottles rolling everywhere, Marky Mark pausing after a death defying escape to pop a cap and swig some. The bald millionaire dude pointlessly slurping some Chinese milk carton straight to camera with irrelevant dialogue. Then the slo-mo Johnie Woo style shooting Bumblebee twisting past a van with Victoria's Secret on the side. It'd have been less subtle if he wore stockings and suspenders.

Should i be surprised? Certainly Transformers is no stranger to it--the motor company GM allegedly gave a million dollars of cars towards filming Transformers 1. But so noticeable? I looked on-line and was surprised how many films I'd seen that were famous for the product placement done in a crap manner: Superman 2 and the Coca-Cola billboard--OMG, yes i remember that; ET and the trail of M&Ms. I googled it and wiki-thingy mentions it goes back to Jules Verne, and travel companies wanting to be in 80 days around the world!! 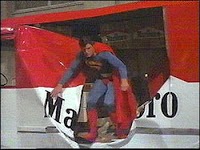 It got me thinking how much fun it'd be to have product placement in unlikelier programmes. What could you advertise in Games of Thrones? Life Insurance? Antiseptics? Thermal underwear? Perhaps a smartphone for Jon Snow (who, after all, knows nothing). Or on Hannibal? Some Gaviscon for the post-flesh indigestion?

The best scene I recall for product placement has to be on Wayne's World. I'll leave you with this clip, and the thought that perhaps the true irony about this was that most of the companies satirised probably did pay for the appearance, even if it was a gag!!!

Chaos in Conflict - CSM vs CSM


So after 18 months of playing Warhammer with my lad, Charlie, I finally had my first game against someone not related to me and able to call on the unbeatable reserves of his mum. Having said that, I’ve never won against Charlie—and yesterday’s game was following suite.


But what a great laugh! I met Iain by one of those weird coincidences wherein we’d both commented on the same photo on a Facebook group and I noticed his address said ’Greetland.’ Long story short, we befriended on FB and met up yesterday for the first epic game.
We’re both Chaos Space Marines players, and for our first battle chose to stick with the armies we knew. Iain’s been playing since he was a lad, and fortunately this was a fun game where I was reassured he was going to go easy on me!
My boys???
The Lords of Aberration –Decay Division (2500 points)

The Lords of Aberration chaos marines

One of the Nurgle Obliterators

Iain lent me a drake to play with, and his 2.5K of awesomeness included a Nurgle psyker DP, terminators in a land raider, two units of CSM (Nurgle), plague marines, Dreadclaw drop pod, heldrake, defiler, a vindicator, and… an Imperial Knight. Yes, I’m not messing with you—370 whatever points of awesomeness, with a big bugger melta pie-plate that made my troops do the impression of the wicked witch having a shower…

As it was my first game of 7th Ed we decided just to go for total wipeout, and off we went…

I didn’t take enough notes to do a detailed Batrep, but essentially we had a standard size play area with loads of terrain (and cover!!), an abandoned Aegis line with Quad-gun and statue, and a river with bridges. I had Helturkey and termies in reserve, he had Heldrake only.

First round I learned about absence of psykers in my army the hard way as his DP sends rotting magic and fly palsies across my troops. I slung some heavy shots against his vindicator and defiler, stripping a few HPs away, and raced up the field with raptors and bikes aiming to flank the Imperial Knight.
Then he flings a defiler, vindicator and imperial knight pie-plate in the manner of a 41st millennium Greek wedding. Think the raptors and chaos lord went down to that salvo, and predator/forgie got scorched. The awesome drop pod lands in the middle of my dudes and his marines spill out.

the ill-fated bikers racing towards the huge Knight....

Turn two the Chosen earned their money by melta-ing the land raider, and some lucky hits from my brute and bikers immobilises his Knight. Similar hits on the vindicator stop it dead in its tracks.
His DP cooked and rotted his way through my cultists, and the Knight blew up two bikers.

Turn three, I blew some more chunks out of his guys but nothing major, and the DP got medieval on some Plague Marines asses—well, the cankerous flakes of armour that resemble buttocks. He returned the favour by his DP toasting my PMs, and his other heavies almost finshing Forgie.

Turn four, and still no drake, and the Termies deepstrike mishap back into ongoing reserves! Noooo!!!. DP finishes off the plague marines and sets his sights on Imperial Knight, whilst Helbrute and one biker keep chipping at it. Then Forgie and Predator nail the Defiler into demon-crab oblivion. In reply, he finishes off predator that round and his Termies annihilate the cheeky Chosen.

The epic finale finds my plasma-melta PMs scrapping with his CSMs and losing; his Vindicator holds on still; and my DP charges his Imperial Knight. On my round of combat we are both still standing, albeit both with a wound left. And my Termies mishap again! 240 points of utter crappery there!

The shy Termies who never arrived at the party

Final round, Iain’s turn five, is like the end of the Godfather. He pops my Forgefiend, my Plague Marines, and my Heldrake. And the fight between the Imperial Knight and my DP? Incredibly I get the hits, and the pen roll—and he explodes. The wave of energy vaporises my last biker, and some of his marines.

Forgefiend, looking rather blue in this photo. Lad did well in battle--earned his points back

Iain is the victor—winning by 3 or 4 VPs due to his slay warlord, linebreaker and first blood. Most importantly we had a great laugh, and finished the game feeling like we’d known each other ages rather than for four hours. It’s funny how life throws these things at you—meeting someone who has such similar tastes and sense of humour in such an offbeat way. I’m hoping we’ve got many more games ahead, and many more laughs.