The Doom of the Eldar- WH 40k Batrep

So, me and Iain played a game of 40k yesterday supported by our respective sons. It was my second game of 7th edition, so still finding my feet with Psyker rules etc.

We played 2.5k points with Taudar vs. Deathwing/Imperial Gaurd (Tempestus). For my part I had:
Eldrad; Spiritseer; Warlock; 5 fire dragons (in Wave Serpent); 2xguardians with weapon platforms; 5 Dire avengers; 5 wraithguard (in serpent); 5 swooping hawks; 3 shining spears; 2 wraithlords (both with 2BLs); a warwalker (EML and SL); Tau commander; 2 crisis bodygaurds; 3 stealth suits; 6 fire warriors; a sunshark bomber.
Iain had 3 units of DW terminators, one with Belial, one with a termie librarian; a contemptor Dread; 4 valkyries, and a bunch of scions with a commisar.

And dice infused with the grace of the Emperor!!!

Thought we'd do this Batrep as a narrative report, written by Iain, with a short comment piece at the end by me!! We only played to end of round 3 because of time constraints (i.e. nursery pick up).


After action report of the raid on planet  - Hopes Reach


After receiving word that all communications with Hopes Reach was lost the Dark Angels were given a tasking order to investigate with a formation of scions in support . The wisdom of Belial shone through and, after an in-depth recon, an unholy artefact was discovered. Belial decided to make a landing with his personal escort plus a formation of stormtroopers as QRF.
During the final prep the presence of heretical alien scum was detected near the site so, like a 'red rag to a bull,' Belial gave the order and the Deathwing dropped in to purge the alien scum in the Emperor's name . 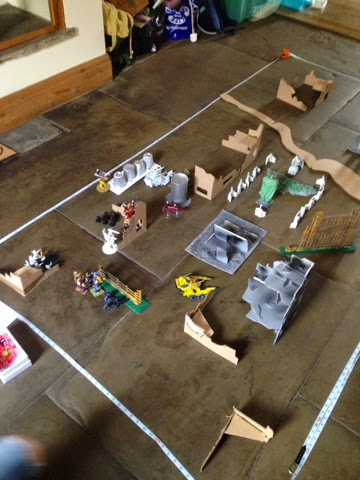 Round 1- Eldar and Tau spread out towards the objective - the Chaos Artefact
When Belial teleported he landed next to a Tau commander, and immediately sought to rid the enemy of its leadership. Yet after destroying the heretic scum leader Belial realised the true heresy of the situation - the Tau had allied with Eldar !! 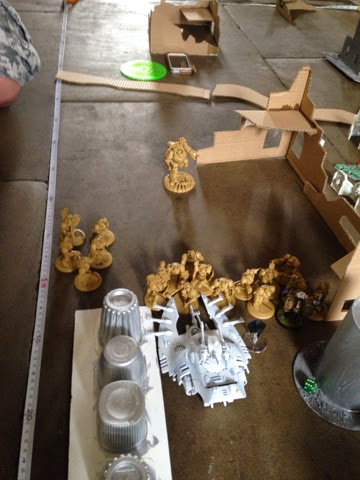 Round 1- the DA teleport in and start battering the Tau commander, and the WS with Fire Dragons.
Instigating command protocol epsilon theta prime Belial called in the QRF. Belial realised that it would take time, as the Scions would have to make the journey from space in their Valkyries, but on arrival they would combat drop via grav chute . Pending the arrivial of the QRF, Belial plus his escort took the fight to the vile enemy destroying a wave serpent full with fire dragons !! It was at this time that the sinister Eldar showed their infamous psyker talents with first a warlock and then Eldrad duelling with librarian brother Tiberious. During the duels that followed librarian Tiberius saw off repeated attacks, and then counter attacked. He utilised his considerable talents to move around the battle zone exacting a terrible toll on the thrice damned enemy !!! 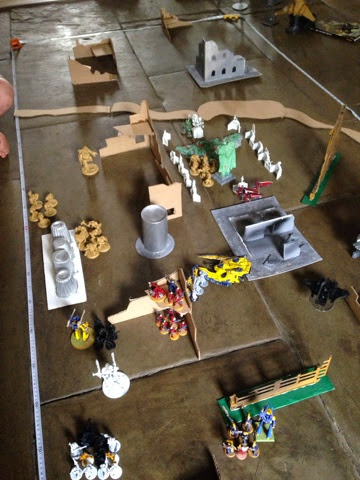 Round 2- Eldar move around to get Wraithguard in position to blast the DA. The shining spears (proxied by windriders) flee from Tiberius librarian and his buddies.
Events rapidly escalated as heretical ghost animated warriors of the Eldar, with armoured ghost mechanical constructs in support, advanced upon the grandmaster and his loyal bodyguard. Angered by the heresy of such witchcraft, Belial plus his escort set about the alien constructs and purged them for good . As the Eldar weapons retaliated, the QRF arrived in all their glory. Four fully loaded Valkyries descended out of the clouds dropping storm troopers off the rear ramps whilst unleashing a powerful display of imperial firepower fury at the enemy across the full width of the battle space !!!! 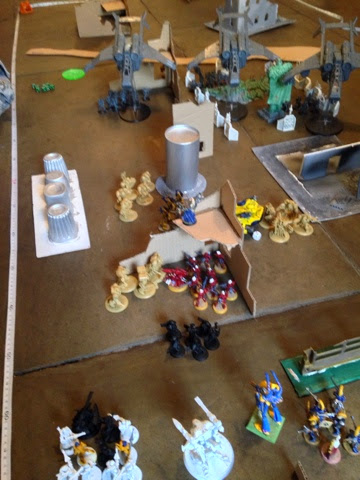 Round 3- having killed a Wraithlord, Belial is after Eldrad atop the ruins. And the Valkyries arrive!
The ancient battle brother Markus Antinious enshrined in his contemptor dreadnought armour targeted an enemy Tau flyer to do some target practice and ended up producing damage to the fuselage . 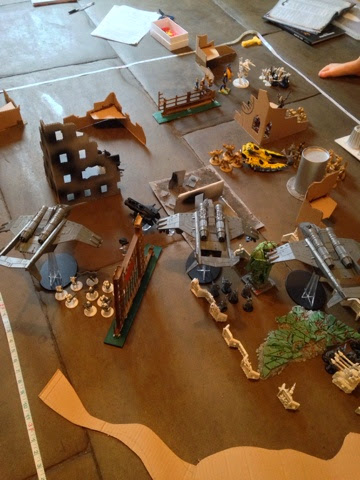 Round 3- a Valkyrie view of the targets!! 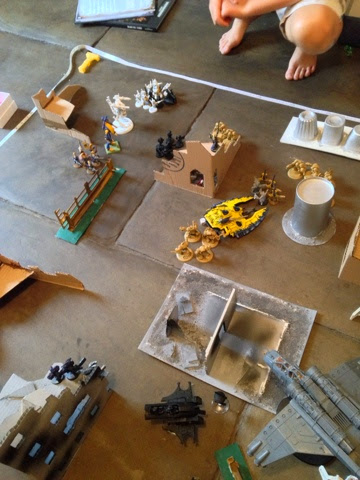 As the end game drew near Belial saw his opposite number in the impossibly old Eldrad on the top of a ruined building. He charged the position, taking an unholy amount of fire in the process, but still walking through it like it was just rain. Belial focused on getting to the vile leader of the Eldar, but it wasn't possible. After trading blows, the thrice damned alien scum opened a portal and Eldrad with the rest of the Eldar- Tau alliance slipped away into the Warp-way, never to be seen. For how long no one knows...

After completing SSE ( sensitive site exploration) protocols the QRF deemed the site secure and the nature of the artifact was established. The heretical artefact was composed of crystalline rock that poured pure evil forth (Brother Tiberius note:  no wonder the warp-stained Eldar wanted it, and as for the Tau no doubt the Eldar told them it's for - THE GREATER GOOD ) . The full rituals of purification were completed and the site blasted from orbit to remove the artefact and any stain of its presence, once all forces had returned to their spacecraft .

This concludes the action report

Thought for the day -
Aliens are filth have no fear no remorse for they will show you none
Do what must be done !!!

With a gesture, Eldrad Ulthwain switched off the display. The intercepted battle report had made for sombre reading. The ancient Eldar Farseer rose from his seat on the ship's observation deck and strode to the giant window. The vastness of space before him weighed heavy on his shoulders.

The Deathwing had proven devastating opponents. Even before the formation of Valkyries had soared in his troops had been taken apart by the thunder hammers and storm bolters. He had lost too many good allies--the Iyanden spiritseer, Ulthas, had died in a blaze of agony with his wraithguard; the warlock, Vyan, had fallen with his Dire Avenger unit; and the Tau Commander, Ir'Oth'Tau, had succumbed to an onslaught of two terminator units at the start of the conflict.

Where had he gone wrong? So many battles, over so many years--he tired of the relentless bloodshed. The Tau had been impetous, eager to secure the artefact, and had jumped away from where the Eldar could assist them. They were easy targets for the deep striking Deathwing. Without leadership the Stealth suited Tau unit, and the Fire Warriors, proved little value. His own units--the Setting Sun (Swooping Hawks) and Swiftest Light (Shining Spears)--had died as they sought to secure the artefact, before the Tau flyer could aid them.

We were ill-prepared for the aerial onslaught and the stolen technology of these Imperial lackeys, Eldrad considered. We should have focused our attacks on single units--methodical, clinical.
Like the Deathwing.
Do I have to become my enemy to defeat them? Is that the true path of the Eldar?

Eldrad turned to regard the Farseer who approached. The eldar was young, but exuded warp power from every pore.

"I asked not to be distrubed during my contemplations."

"My apologies," he replied. "But we have reports of other ships nearing the system. Chaos Marines, Orks, and some space marine forces--White Scars and Space Wolves as far as we can tell. Shall I alert the Tau ship?"

"No, no--not yet. They are an impulsive race, in their desire for the greater good. Let them lick their wounds a time longer, as we do ours."

"We are preparing the Crimson Hunters in readiness for the next strike."

"Which you shall lead."

The Farseer bowed, and then left the observation deck.

So, the conflict was joined by more of the Imperium, as well as the fell forces of Chaos and Orks. Did they suspect the true nature of the ancient technology on Hopes Reach? The Chaos artefact destroyed by the Dark Angels was only a tiny part of the mystery on the planet below.

A mystery that if possessed by naive hands could spell disaster for the galaxy.

So the saga of Hopes Reach will continue next time, as the battle is joined by the White Scars...