And hop over like an excited Bunny to part two at Fresh Pot of Tea
And now for part three.....
If I were a dishonest man (and the admission that my previous Movember moustache makes me look like the Village People indicates I am utterly honest) then I’d claim that some awesome seminal sci-fi story created my interest in alternate reality. The truth is far from that- it was a combination of the awesome old-school Star Trek, and Marvel comics that take the blame.


For those who follow my blog that’ll come as no surprise. I’ve rambled about the key influence of comics in my fantasy writing before, and its impact on my current book, The Infinity Bridge, is glaring. The whole plot begs for a graphic novel, and the pace, dialogue and action is very comic book style in places.

One of the fundamental aspects of the book is the idea of alternate reality, that history/evolution/physical laws of the world could have diverged at some stage from our own. It’s a wonderful plot device—the possibilities are endless, and range from the divergences of individuals (think It’s a Wondeful Life and Sliding Doors) to entire worlds and their structure (think Wizard of Oz and Narnia in more extreme examples). So it is no surprise that the theme is a massive one in the world of comics.


The first mainstream use of alternate worlds was over in DC-world, back in the Wonder Woman and Flash comics. Wonder Woman kicked it off with our hot pants heroine falling through a dimensional rift and meeting a double called Tara Teruna (two Wonder Women... and so the fantasy begins...). But the Flash story, Flash of Two Worlds, was the seminal moment where we have a true ‘alternate.’ It used the great idea that the Golden Age Flash, a comic book character in our Flash’s world as well as ours, existed in a parallel world (called Earth-2 in later series). DC expanded this idea again and again, using the tool to resurrect Golden Age incarnations of their characters, and ones acquired from other publishers over the years.

It all got a little bonkers in the end, and DC started to wrap it all up with the series Crisis on Infinite Earths... and then rebooted and rebooted and wrote Infinite Crisis and 52 and... bleh...


But I’ve never been a DC boy (although my moustache again may infer otherwise), I’m Marvel through and through. For me the series ‘What If’, which was serialised in comics was my first exposure. It was a series where the light-bulb headed Watcher told a yarn about a reality that had diverged at a significant historical moment in the Marvel Universe. There were so many good ones, the memorable ones for me (probably because his was the most popular comic at the time) being the Spiderman ones: what if Aunt May had been popped instead of Uncle Ben?; What if someone else had been bitten by that radioactive spider?; What if Spidey joined the Fantastic Four?; What if the Spider clone lived? (it did, much to the groans of multitudes of Spider fans).

Yet those tales were only ever short spin-off ideas. The parallel worlds and alternate history as actual plot lines in Marvel comics really took off with the X-men. My era of the X-men was the classic Claremont-Byrne run, reprinted in the in wonderful monochrome which made some parts rather tricky to follow. Towards the end of their run together, the pair did a story Days of Futures Past, in which characters from an alternate future travel to the mainstream world of the X-men to try and avert a key event that created their divergent reality. It was massively and deservedly popular (not least because you got to see Wolverine toasted by a Sentinel...bub) and returned again and again to that alternate, often bringing characters and villains across (Rachel Summers Phoenix; Nimrod; Forge etc).

The idea grew and grew over the years, and there’s an awesome geek out list on the web with all the alternates numbered (from a 2005 summary I think). I found myself reading like a sad-o through it and nodding at the ones I recognised....


You can see the appeal as a writer, especially if you write a series. Alternate realities allow the writer to screw around with characters, about what we know or think we know about them, without upsetting the mainstream ones. It also allows the rather tired concept of evil versions of characters to be used (none may live up to the glory of evil-Kirk and his guy-liner).


It would be difficult to write anything on comics and how they influenced me without doffing the cap to Alan Moore’s Watchmen. Watchmen runs with the concept of how history would be altered if superheroes existed in our world—so how would the presence of a superhuman impact upon the Vietnam War, or international relations/politics, or day-to-day living, or technology. The influence of the Watchmen comic on the genre is vast, and it deservedly maintains its status in comic book history. If you are not a particular comic fan and wanted to see what could be done differently with the genre then this is a great place to start (the subtleties to the plot-lines are marvellous). 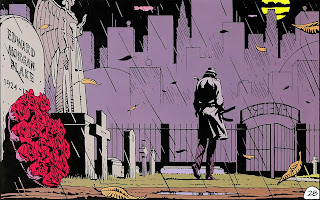 So that wraps up my ranting on alternate worlds, taking it back to where it all began for me. I haven’t broken any new ground in my book, using the alternate history model as an excuse for Steampunk fun. Oh, and its meant I could have an ogre pop up in some woods near . In the sequels to the book I’m planning a few weirder ideas... and, yes, at some point I’ll need an evil version of a character. Its just got to be done...
The Infinity Bridge is up on t'Amazon, both in print and in Kindle. If you want a peek then click on the links...
Amazon UK
Amazon everywhere else, like the USA and Oz 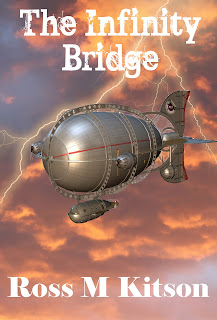 I don't often post about my books or writing on here, mainly because there's more interesting things to rant about. However, when there's a new cover to show off, I just canna help meself.

Darkness Rising- Secrets is the third of six books. Unlike books 1 and 2, which were the result of a split of a single volume, it was written more as separate work. As with book two it runs two parallel story arcs, Emelia's quest for the crystals, and Aldred's journey. There's also the minor plots with Torm, Emelia's friend from bk1, who is our 'Everyman' character and more on Vildor, our baddie.

When there's so much going on its tricky to design a cover. Books 1 and 2 were stunning: we used a rather striking model for both, and the first decision was whether to continue with her on the covers. The dilemma was that if she graced bk3 then we were committed to all six with her.

Discussing with Ceri, the amazing cover designer at Myrddin Publishing, we opted for a change. After trying images to represent Marthir (and her tattoos) and Vildor, we settled on a representation of Hunor, the rogue and leader of the comrades. For the background we opted for an image of the swamps of Ssinthor.

"After some period they became aware of shapes forming in the fog. Tiny at first, they grew in stature until ultimately they recognised the deformed trees of the swamp. They loomed all around. The branches reached like rotting arms towards the disorientated comrades.

There was little doubt they were far deeper into the swamps of Ssinthor as they exited the mists. The air was both hotter and wetter and the stench of the swamp overpowering."

On the full wrap around cover you can make out the silhouette of a building. We've used this as a representation of the Temple that the gang are seeking out, based on Jem's interpretation of Emelia's lore-touch.

"The four crept through the boggy foliage. Within five minutes they had reached the edge of the woodland and Orla had her first view of the temple.

Its shining black walls contrasted vividly with the near homogenous emerald colouration of the surrounding swamp. The temple was constructed on a raised area of land, but this aspect had not prevented the creeping green of the swamp’s foliage from working its way up to the walls. The ancient carvings of snakes and dragons were interspersed with bulbous creepers that gave the structure a horrid vascular appearance."

So, here's the final result. Different to bks 1 and 2, but with enough of the theme to make it feel part of the series. The book'll be released on Kindle just before x-mas, with the print early New Year. Fun times! 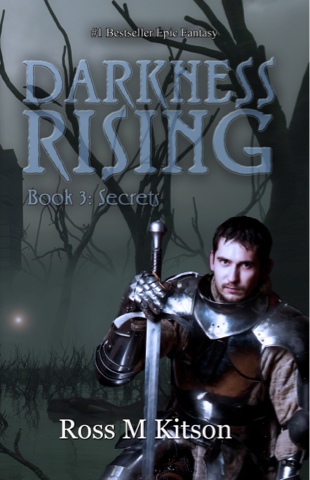 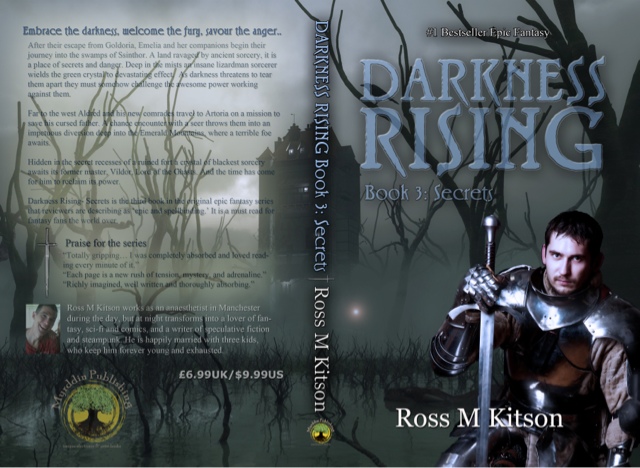