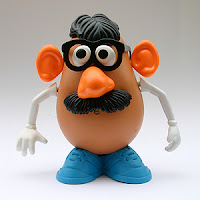 My youngest turned two the other day and amongst his haul of presents (most of which revolve around tractor-themes) was a Mr Potatohead. This elicited screams of delight from the older two, who then ‘helped’ him make his Potatohead by taking it off him and doing it. They were unusually cooperative—they compromised on the choice of eyes, teeth, hat, arms and nose. The resultant Potatohead was anatomically correct (well for a potato-human hybrid) and they presented it back to Henry who chuckle and pulled all the bits out. Then Henry poked them all back into the various holes and created the sort of Potatohead you’d get from bathing in gamma rays and getting angry. Three arms, tongue jutting out of his arse, no eyes, that sort of thing. He finalised the whole thing by shoving the toy glasses on my face (better than shoving the tongue up my bottom, I suppose).


What made me chuckle was the fact Henry, being two, had very few conventions to follow. He put the limbs and eyes and hats where he fancied, and liked the general look of the creation. It’s like when he draws—he just gets crayons and scribbles like a Brass-Rubber on speed. It looks good to him so f%$£ it!

Creativity without boundaries is something many adult artists aspire to in their work. They try to emulate that period of your life where you can just splurge out something that looks/feels good to you and be damned with what others tell you. It doesn’t last long though. As soon as you hit school the restrictions start. Some are understandable—you have to write letters so others can read them... it’s called communication. Others try to channel you down conventional lines: stories have a start, middle and end. The kids are marked down if their short stories don’t follow that line. This was troublesome for my eldest son, Charlie, who has sensory processing disorder and dyspraxia, and tends to throw his ideas down like Jackson Pollock painted. Its taken years to adapt him into a conventional writing structure (and we only did it because he has an exam in two months where he has to write like that!). 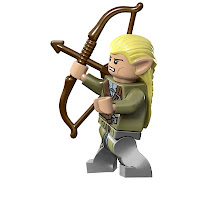 But creativity isn’t just about form, it’s about content. One of the best things about being a Geek-dad is that my interests—reading, writing, comics, DnD, drawing, Dr Who, fantasy—have permeated into my kids in a positive way. Whether you’re a fantasy fan or not, or whether you think comics are a childish media or not, you can’t argue that they don’t fire the imagination. My two eldest have seen this geek-heritage, and seen my writing and publishing books, and been inspired. Charlie (10) is an avid reader, years ahead of his age, and is munching through fantasy and sci-fi series like there’s no tomorrow. He loves creating in his games, is mad-keen on DnD and creating stories around his characters, adores his Lego still, and scribbles comics all the time. Whereas his written work at school is constrained, the stuff at home is wonderfully imaginative. 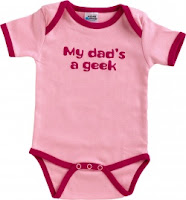 Evelyn (8 ½) naturally enjoys all the things her elder brother does, with a slight chick-bent. When she plays DnD she likes the role-playing parts, and making the backstory, rather than the slaughter of kobolds. Her reading is definitely girly, although she is reading Harry Potter again (she read the first three at 7) and she’s discovered some wonderful series (Holly Webb’s Rose series, RJ Anderson’s Knife series). She read Jacqueline Wilson for a good while, but stopped recently as she felt they were a bit miserable in places. Although she does well at most things, Evelyn’s strength is writing. She’s written a whole bunch of stories, some only half-complete, others done and dusted. Some she illustrates, others not. She’s planning to be an author (as well as dancer, singer, actress—Charlie is planning to be in MI5...) and if the following story is anything to go by she may well manage it!

She wrote this after a shitty period of bullying at school, which I’ll tell you about another time. It was a way of trying to express her feelings and write a story about being believed by people. As convention goes, it has a start, middle and end, and you can see the influence that Disney Channel programmes and Jacqueline Wilson has had on her. But (proud dad that I am) this is her own work, with the help of Microsoft Word doing that red and green squiggles, Daddy. No-one else has touched it!

Something Different by Evelyn M Kitson

“Ha! Ha! Ha! Ha! Ha! Ha!” I was in the playground on a Thursday; chatting with my friends Lol, C and Abi, when guess who wandered up? Robin, the school bully, even though she’s a girl. She always picks me as her first victim. It all started in kindergarten. She asked me if she could sit in the empty seat beside me, so I said yes because I was new. She peered at my writing and suddenly burst out laughing and I didn’t even know what was so funny.

So since then we’ve been deadly enemies.

“What’s new Fesilly?”  She said, waving her arms about. “Look! Look! I’m Fesilly.”
“The name’s Felicity, Robin. Why don’t you go flap your wings and let us talk in peace?” My friends snigger uncertainly looking at Robin with weary eyes.
“Flick! I know a place were we can talk in peace! Lets go!”
So we did.
When we got inside the school, Robin was waiting. When I sat down she fired a spitball at me and by the lockers she grabbed my overshirt and threw it in the bin!
***
“Hey sweetie! How was school?”  asked my Mom as I walked in the door.
“If you want to know how many good things happened today, zero is your answer.” I answered.
“Robin?”
“You got it.”
“I don’t believe you, Felicity.  I think you’re as bad as each other.”
Ignoring her retort I went to the kitchen cupboard and got some oreo biscuits and started dipping them in my milk.
***