A Cup of Tea with Alison

One of the great things about signing up with Fantasy Island Publishing has been the opportunity to meet other writers. When I first looked at FIBP for submission I romped around their web-site like a 70kg baby and one or two books really leapt out at me.

One of these was Alison DeLuca's The Nightwatchman Express. Part of it was the amazing cover, part was the blurb and part the genre, Steampunk.

I'd got into the Steampunk thing originally via Bryan Talbot's Luther Arkwright and Moore/O'Neil's League of Extraoridinary Gentlemen. From there I'd got ahold of Tim Power's Anubis Gates and KW Jeter's Infernal Devices. I'll not ramble on as I plan to write a post about it all soon enough.

Alison's book is wonderful. Its a perfect adventure story, set around turn of the century and reminded me of traditional adventure-mystery stories that used to captivate me as a kid. I posted a 5* review on Amazon which you can read here: Review of Nightwatchmen Express

Anyhow, Alison asked me to guest on her blog- 'A fresh pot of tea'- and I've ranted on in my own usual way about fantasy, specifically about anti-heroes in fantasy. Please go and have a shufty and whilst you're there look at all the other posts. It's an excellent site. 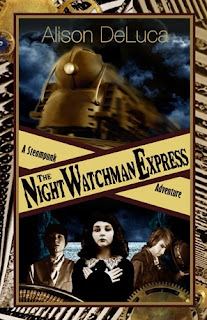 Cavort! Rejoice! The book is released!

Close the windows and shut out the noise the annoying teenager is making on his hairdryer motored scooter.
Tell the kids Aslan is hiding in the cupboard then lock them in there.
Pour lighter fluid on the phone and chuckle as it melts.
Throw the telly out of the house like an aged coke addled rock god.
Ease a bottle of red from the wine rack and marvel as it sloshes like the nectar of life into your thirsty glass.

Slip out the Kindle that Santa brought you, all the while gnashing your teeth in mourning for the demise of dead-tree literature.

Ssssshhhh... What is that sound?

Faint, like the whisper of a promise once told. Faint, like a memory faded by the glare of time.
It is the wail of the Valkyries as they rejoice in near orgasmic delight. It is the gasp of the goblin as his viscera decorates the battlefield like slithery bunting. It is the lament of the sword-wives as they reassemble the scattered body components of their warrior spouses.

It is the sound of Epic Fantasy.

It is the arrival of Dreams of Darkness Rising....

Enjoy! And remember to let the kids out before the dwarf with the Turkish delight gets them... 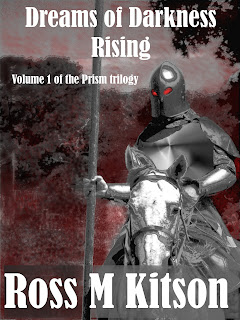 Those of a certain age will recall the cartoon series of Dungeons and Dragons that graced our TVs in the late Eighties. I can recall at the time cringing as a hobby with an already ‘weird’ reputation was dragged down a few more notches. It was especially irritating as a Dungeon Master to have kids at school chuckle with the idea I donned red robes and a bald head wig (and shrunk about three feet).
The aspect that really got to me was that I sniffily thought at the time that DnD wasn’t a game for children, at least not of the age that would be impressed by a cartoon. No- our game was far too mature, far too violent and far too intelligent for ‘kids.’ After all, the illustrations in the 1st Edition Monster Manual and Deities and Demigods had bare breasts every other page!!
So twenty five years on and I’m digging the books out of the garage, sitting up until the early hours drawing on graph paper and chuckling at my latest traps without another adult in site. Contrary to popular belief I’m not playing the game with an array of delusional constructs from my fevered cranium.
No, now my kids play it.
Eeek, kids playing it. Am I consigning them to a lifetime of drooling insanity and devil worship? Well, no, that’ll be the Xbox360 ultra-violent games at age twelve that do that. Will my son be stripping to the waist age sixteen, running around with a sword in MacDonalds dodging police snipers and screeching, “Crom!”? Possibly, although that’ll be the product of Heavy Metal records on his i-pod, or at least that’s what I’ll tell his mum.
The kids began pestering me to play DnD about a year ago. A mate at school had been reading the Fighting Fantasy books and from there had got into Labyrinth Lord—a refashioned version of Basic/Expert DnD. Charlie was eight then and Evelyn six and I dodged the issue of playing with them and instead gave Charlie some of my old FF books (which I had stowed in the TARDIS-like garage).
I used to love those books. Warlock of was my first movement into fantasy gaming—I bought it when there were only the first three on the market. Over the following years I bought most of them and the off-shoots like Sorcery and Lone Wolf. They got me, along with the ubiquitous mate with older brother, into RPGs which really boomed in the Eighties.
But as with me, it wasn’t enough. So we embarked upon B2: Keep on The Borderlands, with six characters and some brand new dice. And they loved it. It took them a week or two to get their heads around role-playing and combat but both of them are full-on into it. Evelyn enjoys the role-playing more—she is constantly creating her own back-stories to her characters and trying to devise romantic story arcs with the NPCs (should I be worried...?). Charlie likes the fighting, the silly bits and most of all the experience points and achieving levels.
Every so often I have to get over myself and remember I’m playing with my kids. They don’t always take it seriously—but then who ever did? They squabble like only siblings can and we avoid playing the day after a late night lest Charlie give Evelyn a +3 thump to her arm. I tread carefully on the violence and random slaughter—we had floods of tears when a trap sliced an insane gnome they had befriended in twain. Yet even when their characters have died (only one so far) they coped with it well. I’ve started putting in logic puzzles into trap rooms for Charlie to solve and role-playing scenarios in for Evelyn and they love those bits.
And most of all it’s a special time that we share where they use imagination and create along with me. It may be a flash in the pan, but I hope not. After all I’ve got White Plume Mountain, Tomb of Horrors, the Giant series and D1-3 tucked away to play.
So with due deference to Bobby the Barbarian, Eric the Cavalier and Uni the Unicorn, you were right. It can be for kids too.
﻿ 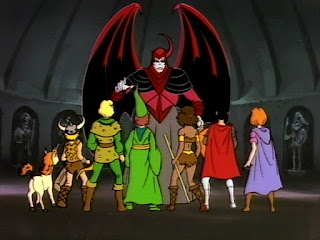 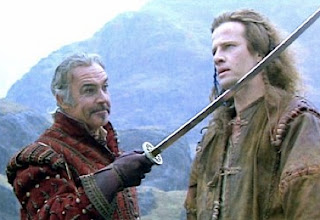 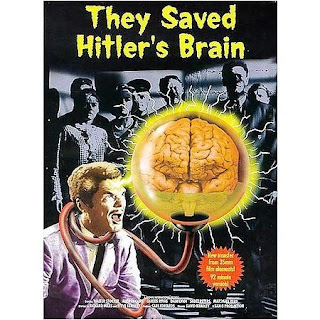 I'm in this eternal conflict when I write fantasy. On the one hand I enjoy reading the gritty stuff. I can honestly say the George RR Martin's Game of Thrones got me back into reading fantasy in a big way and was one of the few 'must keep reading one more chapter' books of the last few years for me. Same goes for Scott Lynch's Gentleman Bastard series. But when I sit down to write, intent on creating another dark fantasy masterpeice, choc full of incest, regicide, sodomy, bestiality, necrophillia, abuse of aubergines, melting elven ears in blasts of deadly fire... I...I...just can't do it.
Why? I love reading the stuff. I've followed Martin's series through...I've got Joe Abercrombie lined up on my kindle (Torturer! Yaay!)... I just can't write it. There's a deep down sense that at present my main readership (almost enough to have a football game with... well, a 5 a side one) are my chums and family. My wife's aunt (vicar), my father-in-law ("he wrote what about the dwarf toasting goblin babies on a spit...and he married my daughter...") and, undoubtedly in time, my kids ("Dad, why are the brother and sister playing ponyrides in the abandoned tower?" "Errmm, ask George RR Martin, I stole it from him").
But that's not the only reason. I think that I simply won't enjoy writing it. Sustaining such a tone over a whole novel would be exhausting... it would be dispiriting. I dredge through enough misery in my day job, watch enough pain and sorrow on the telly. Why would I want to create more, even if it makes fantasy that bit more appealing to the mass-market?
Because when I write the stories I want to like the characters. Some may be painted in shades of grey, some may be tortured souls, but they will all find some kind of purpose and redemption. They'll all argue and fight, and laugh, and cry and get pissed off. But ultimately they'll be fun to write and those who read my book (almost up to two football games now... and a tournament full for my short stories...) will end it with a sense of happiness rather than a wince at the brutality of the prose they've just read.
Grittiness in fantasy isn't a new phenomenon: Elric (begun in the 60s) was an anti-hero in every sense, betraying his people and knocking of his mates at a rate of one per page with his soul-sucking sword (and didn't every D&D player want one of those... Blackrazor anyone?); Tommy Covenant the Leper Who Didn't Believe in Anything but Similes was not likeable in any way, not least when he began the trilogy with an unforgivable act. But Martin (and perhaps Jordan) paved the way for a real shift to grittiness and realism which opposed the often droney high fantasy of Tolkein and Brooks. But there is a middle ground, I'm certain. I think of the work of Fritz Lieber, with the humour of the Grey Mouser, or of Jack Vance and the superb Cugel. I think of the enjoyment of Dragonlance by Hickman/Weis or the energy of Patrick Rothfuss or the characterisation of Robin Hobb's Farseer. They strike a readable middle-ground- feel good fantasy without being too soft or having a ten page verse about Elven history.
And hopefully a smile on my face, even if the kids can't read it quite yet... 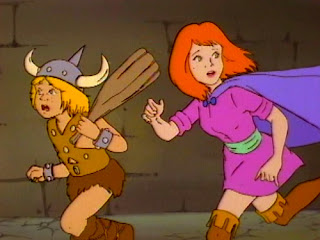 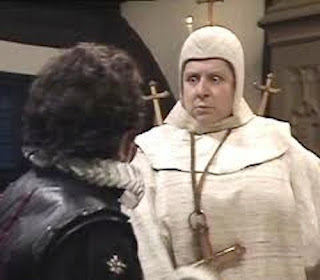 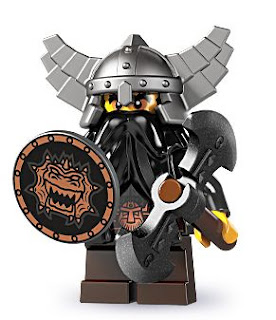