One of the coolest things about fantasy (and there’s a sentence that before HBO’s gore and shag-a-thon, Game of Thrones, would have never been written) is the wide variety of how magic is perceived in the genre. There’s a deluge of articles about designing magic systems and ensuring logic and coherency, but I won’t reiterate those here. Suffice it to say that magic is one of those things that if you write badly, and use as a continual ‘deux e machina’ (or, I suppose, pulling a rabbit out of the hat) then it’ll bugger your book in the manner of a horny troll with a tub of Vaseline +2.


I enjoy magic in fantasy books, I think it gives it a texture and a richness that no other genre can match, and I also enjoy the different styles of incorporating it, in the same way that I love Dark Fantasy as much as epic or heroic. Before you think this is an Aldi advert, let’s start delving around different ways of writing sorcery..... 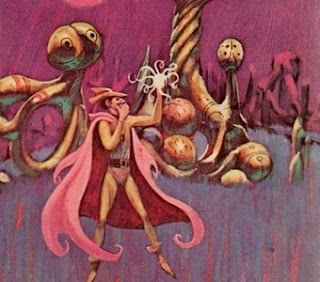 For me, as a kid, I began reading fantasy mainly due to my interest in DnD. The magic system in DnD is obviously designed around the wargaming origins of the game, having your magic users learning spells from their list, being allowed to cast so many before they become dagger wielding softies. The concept was that the magic had a verbal part, a material part, and a learned way of wiggling your hips as you did it. Gary Gygax, former master of my universe, drew much of his inspiration from Jack Vance, and the Dying World series. Certainly in the first book—The Dying Earth—which is a collection of short stories, that style of magic is apparent. In those works spells are learned, and then once cast are erased from the ‘working memory’ until relearned. There is a wonderful concept in ‘Turjan of Mir’ wherein the words themselves seem to carry the power:


‘He stared down at the characters and they burned with an urgent power, pressing off the page as if frantic to leave the dark solitude of the book. Turjan closed the book, forcing the spell back into oblivion.’


‘He then sat down and from a journal chose the spells he would take with him. What dangers he might meet he could no know, so he selected three spells of general application: The Excellent Prismatic Spray, Phandal’s Mantle of Stealth, and the Spell of the Slow Hour.’

Many works (including mine) have drawn their influence from DnD and hence from the ‘Vancian’ system. The obvious ones are those like Dragonlance, which was originated in an awesome DnD campaign, and so has Raistlin (at least in the original trilogy) learning spells and being knackered every time he casts... Featherfall...(Ok, so he got a bit harder when he hit level 12 in the finale). Other authors, such as the excellent Gary Vanucci, emulates the fast paced combat style of DnD magic in the Ashenclaw series—where the magic compliments the sword-craft perfectly. Gary’s work has been compared to RA Salvatore, although I haven’t read what style of magic Salvatore uses. 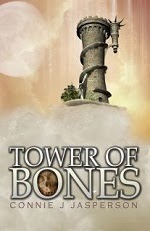 The throwaway style of sorcery lends itself perfectly to gaming, and one book I read recently that was influenced by on-line/RPG gaming was Connie Jasperson’s two books, The Tower of Bones, and the Forbidden Road. Connie takes the concepts in a different direction. The magic in her world is fuelled by Chi, like a life-force, and the sorcerers/priests who wield it, use it for either healing or for manipulating elements. Their approach is utterly scientific, and they study it as a science rather than an art—rationalising how to improve it, and manipulate it in unique ways. The healing in the book reads like a medical manual (which naturally, I loved!!!). And why not? Why wouldn’t magic in a fantasy world become like a science, in a strange parody of how in history events now rationalised by science were probably regarded as witchcraft.

There’s so many cool systems! Moorcock’s books have a magic wherein its practitioners constantly bargain with demons and gods of chaos/order to manipulate reality. Le Guin’s Earthsea books have a tried and tested formula of objects in the world having ‘true names,’ which carry power when utilised. I suspect she was the first to utilise this in popular fantasy, although Paolini used a duplicate system in Eragon and those other dragon books.


Then there’s the idea of channelling other world’s energies, or using some other ‘place’ to fuel your sorcery. The Amber series by Zelazney is kind of like this: after walking the Pattern, those of appropriate birth can manipulate the reality of all things in the shadows of Amber. Another great example is Erikson’s Malazan Book of the Fallen series. Here we have a pocket universe, or Warrens, which are accessed and opened by the mage to desired effect. This is a great concept, and it works really well in the books. Oddly what it reminded me of was the rationalisation of superpowers in the Marvel Universe’s Guides—so, when Cyclops fires his optic blasts his eyes are tapping into another dimension and acting as a conduit. 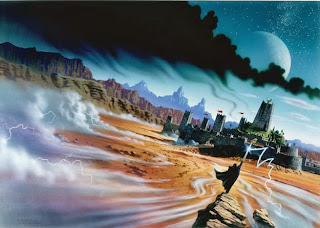 Which neatly brings me to my own style—which is unashamedly super-heroic in origin. In Nurolia, there is elemental magic, which comes naturally to the elemental races’ mages, and via use of Gems of Power and lots of lessons in humans; and there is Wild-magic, which is psychic in origin (so telekinesis, telepathy, pyromancy, but used in quite creative ways). The ‘evil’ magic, although clearly the other magics may be used by selfish or unscrupulous individuals, is Dark-magic, which is portrayed in the books as the fifth element.

When I designed Wild-magic I had a concept in my head similar to mutants in the Marvel X-men series. I liked the idea that the ability could occur at random, and what impact that would have on normal folk in a fantasy world. In the same vein as mutants being feared and despised, Wild-mages are ostracised and persecuted by the Elemental Orders, and this alienation is compounded by the fact that Wild-magic produces problems with the mind, either psychological (Jem’s OCD, Emelia’s bipolar disorder, Lemonbite’s schizophrenia) or neurological (I don’t want to spoil who, for readers of the series). I also liked the fast-paced angle of superpowers in the comics, and wanted that recreated in my rather televisual style of writing. The finale to book three, in the temple in Ssinthor, where the heroes scrap with the zealot, has a very fast-paced use of magic which I hope works.


I still couldn’t get away from some magic tropes, though. Elemental magic still needs a source (the Gems), words and gestures. Hence mages are held captive with special masks and manacles, or via an elixir that suppresses their sorcery (Pure Water, from Goldoria). The idea of items acting as conduits, or power sources, is another well established magic system. Brooks’ Shannara series uses items and artefacts to great effect; games such as Final Fantasy and Skyrim use soul gems etc; the One Ring in LOTR; RA Salvatore’s Demon Apostle, and the gemstone magic; Joshua Bigger’s hard-hitting fantasy, Dark’s Daughter, Hope with its gems and extension of eastern chakra mysticism. Even good old Harry Potter has magical items galore—the Philosopher’s Stones, the Deadly Hallows, the thingies that He With No Nose sticks part of his soul in.... 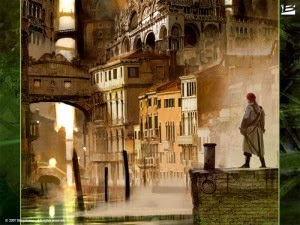 There are so many and so little space before the reader dozes off. Magic can be present in a fantasy world, but not be especially in your face like my lightning tossing, Wild-magic shielding characters use. The obvious examples are ‘realistic’ fantasy, such as George RR Martin’s Song of Ice and Fire (or is it Fire and Ice...?). In George’s world, the magic is more subtle—the shadow monster thingy that bumped Renly off after popping out of Melisandre’s foo; the worgs and their animal body skipping (skinchanging?); resurrection, with poor old Beric Dondarrion held together with masking tape; those dudes with the blue lipstick, who pop up in the market despite being toasted by dragons. For his realistic setting, it works very well, and this subtle use of magic fits dark fantasy perfectly (such as the awesome Scott Lynch’s Lies of Locke Lamora), as well as lighter fantasy such as the Farseer trilogy by Robin Hobb (the Wit and the Word—lots of mind influencing, animal possession, and so on).


The final quote on magic in fantasy—let’s stick with Georgie...


“Sorcery is a sword without a hilt. There is no safe way to grasp it.”


So what’s your favourite magic system in fantasy? I haven’t read WOT by Robert Jordan, or Mistborn by Brandon Sanderson, but by all accounts they rock big-style on the magic front. For me, I think the cleverest was Erikson’s—it had a maturity and originality that fitted perfectly with the intricate tone of his books.


But I still like the idea of two mages zapping the crap out of each other like medieval superheroes... I can’t help it!!!!
Posted by Ross M Kitson at 02:20