It's taken me a while to get around to reading the second book in Pat Rothfuss's series. That's not because I didn't enjoy the first book, it's just it came to my attention on a wave of hype, and it didn't quite live up to it. There was. However, enough to make me buy the second whilst looking for my holiday read from a fab bookshop in York. 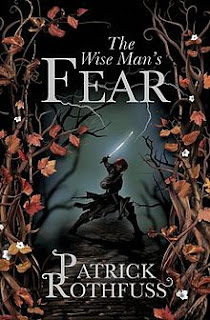 The story picks up in its two timelines fairly promptly. The contemporary narrative (in third person) has Kvothe, the legendary hero, hiding as an innkeeper and recounting the flashback to a scribe, the Chronicler. The sleepy village inn has just been rocked by a possessed mercenary being killed in the inn, and the locals are organising a funeral. The events in the present occur over a day (which presumably means the flashback narrative is being written by a scribe that can write twenty times faster than I can type). The motivation of the Chronicler, to record reliably the truth of the heroic deeds of the legendary Kvothe, is further driven by the fae, Bast, who wants to return Kvothe his mighty past. We wonder at Bast's motivation, whether driven by a concern about the ongoing war (which we are led to believe Kvothe has begun by killing a king) or some other reason connected to the Fae (whom we discover more about in book 2).


Noting the above, the meat of the book is in the flashback section. Book one was dominated by Kvothe's first year at the University, his on-off fascination with the mysterious Denna, his rivalry with the rich kid, Ambrose, and the ongoing desire to learn more about the Chandrian, the seven creatures that killed his parents. It culminated in a scrap with Ambrose in which Kvothe broke his rival's arm by 'naming' the wind, namely harnessing its power using magic. 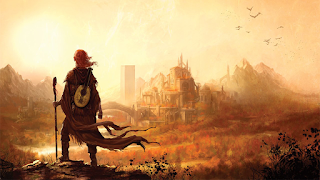 Unlike book 1, which was dominated by the University, this book takes Kvothe out of the restrictions of academia, and to the lands in the east of the civilised lands. He takes a sort of 'gap year' after a trial draws negative attention to the University and his fees are hiked. Seeking a patron to fund his side-line as a  minstrel, he journeys to the city of Severen where he works for the Maer, a noble. This leads to a series events involving bandits, the Fae, training with a race of pseudo-samurai, and then performing a daring rescue. All of this bolsters his reputation, and finally leaves him with cash in his pocket and a kick-ass sword.


There were so many good things in this book. Kvothe is endearing and believable as a hero. He is moral, but not overly so. His cheekiness and charm bring forth images of the cocky protagonists of so many movies, yet inside he has a deep burning anger at what destroyed his life in the early parts of book 1. This bursts forth in a well written sequence later in the book where he slaughters a group of thieves. He's not above foolishness and arrogance, yet you forgive him those moments because ultimately you root for him throughout. 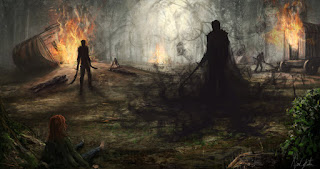 Rothfuss excels in several areas for me: the intricacy of the magic system, and the detail of the foreign cultures. Of the former, the rationalisation of the various disciplines of magic studied at the University are beautifully done. The near scientific basis of 'sympathy' (manipulation of energy, linking objects thermodynamically), 'alchemy' (portrayed here as advanced chemistry) contrasts with 'sygaldry' (using runes, although in quite a engineering manufacturing artefacts type way) and 'naming' (following the Le Guin idea of everything having a 'true name' which conveys control over an entity or element). I love the idea that philosophical and ethical progress has matched these disciplines, and that they are discussed between characters as degree-level subjects would be in our world. It tickled me that the concepts they discuss I medicine in the book are far advanced from most pseudo-medieval fantasy worlds (the use of the term 'sepsis' for example). It all provides a very believable structure to the narrative.


The second salient point to me was the depth of Rothfuss's cultural creation. Hinting at his skill with the descriptions of the Court of the Maer, with its protocols and etiquette, he excels himself when Kvothe trains with the Adem. The richness in the way the Adem speak, perceive, believe, and regard other cultures is so well written that it made the book for me. I loved the concept of the Katan, even with the corny Kung-Fu names, and the indefinable Lethani ethos. I loved the tree with razor leaves, and the culture shocks Kvothe experienced, especially the idea of singing as 'whoring.' Just great. 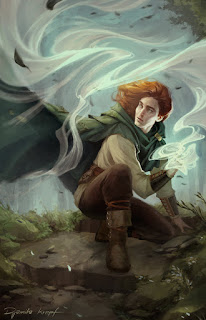 The supporting characters grow as well as can be expected in a largely first-person narrative. The University ones are a little lack-lustre, with perhaps the exception of Elodin, and the curious Auri (who earned her own book). Denna, as I'll note below, irritated me yet was well drawn. Devi I liked and hope we can see more of her in book 3, although I suspect not.


The book isn't perfect. The pacing really struggles at times, and this may be a personal thing. Whereas I liked the period of training in Ademre, and the preceding period hunting bandits, I found the general flow of the book tricky. Certainly it was long, although not overly so, but there were periods of stagnation that really dragged the story. I'm all for the author enriching their world, but some parts of the book felt indulgent and in need of trimming.


Similarly, the structure is rather odd. The book seems to peak too early, the phase in Ademre and the rescue of the girls is the nearest we get to a finale. Then the book sort of ambles to a conclusion after this, with a fair bundle of hooks for the next book. I accept it is part of a series, yet other authors manage to create a story within their series that comes to a conclusion, that resolves some in-book themes, and that leave you feeling you’ve read a book not an instalment. George RR Martin doesn't, Steven Erikson and Scott Lynch do, and as I read more and more fantasy I'm erring to prefer the latter.


And finally, Denna. I see what Rothfuss is doing, showing the complexity of their relationship, the intricacy of a well written female character. But with two books of a thousand pages we don't seem to be advancing anywhere with her. We're left with the same frustrations as we had ending book one. I'm certain the next book will see her character finally hit the spot, and I wonder whether her abusive patron will be tied up with the actions of Kvothe in starting the war?


And of the third book… I hope Rothfuss doesn't do a Martin on us, and get side-tracked. I can't see how this series will be resolved in just one book, unless he either cranks up the pace, alters the balance of contemporary vs. flashback, or writes another series about Kvothe in the modern day.


We'll see. And I'm desperate to know what's behind the doors…