U3: The Final Enemy

The heroes finally made it to the third adventure in the trilogy, and one of the tougher modules in first edition DnD. In the last installment the characters assaulted the lair of the lizardmen whom they had discovered were purchasing arms from local smugglers near the town of Saltmarsh in Keoland. After a moderate amount of green gore and treasure grasping they discovered that the lizardmen were trying to form an alliance with other underwater humanoids to tackle a tribe of Sahaugin who had invaded their home on the border of Keoland and The Hold of the Sea Princes. 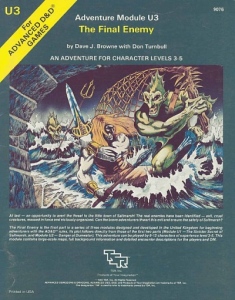 The module opens with the characters once more before the Saltmarsh council, discussing a reconnaissance mission along with a unit of lizardmen warriors and human marines. For a substantial fee the seven agree to enter the Sahaugin base and scope out the number of enemies, defences, leadership and so forth. Without further ado, the seven sail towards their mission.... 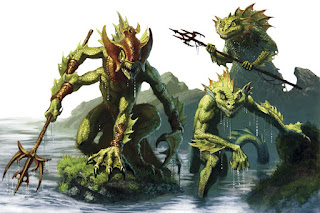 They notice on arrival, during the daylight, that the sea level has risen up the side of the island that houses the lair. Instructing the ship to keep a fair distance, as the Sahaugin 'sea devils' may come patrolling, the characters, lizardmen, and marines land onto the causeway and enter the lair. Straight off they battle some Sahaugin guards, with some others through a lowered gate taking pot shots. Crue and Emelia dispatch their pseudo-dragon familiars through the bars and into the second chamber to activate the mechanism controlling the gate.

As the gate raises, the characters scrabble under and tackle the second room of guards whilst the lizardmen fight the first room full. The battle is swift and bloody, and moving from here the group explore the upper level. They find little beyond the alterations and building work that the Sahaugin and their slaves have done, taking notes on the layout and rooms. With luck they find a near-dead adventurer who tells them, in his dying breath, of the equipment of his deceased colleagues. With a bit of searching they find the hidden room, and the hoard of magic items that generate a rather long debate about who should get the Wand of Polymorph. Ultimately, Emelia grabs the wand and Elangos the cloak of the manta ray, and Vicdak the Ring of Free Action. With a few water breathing potions also discovered, they begin to wonder about what these items indicate. 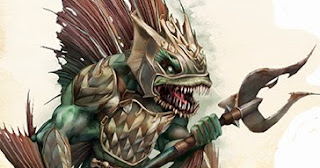 It becomes apparent in the next room, after defeating the Sahaugin guards and freeing some slaves, as the stairs down to level two slosh with sea water. Emelia smartly uses the wand to polymorph Loren, Loki, Vicdak and herself into Sea Elves, with the potions shared between Crue and Gideon. And then they descend into the depths, slowed by the non-polymorphed members.

Moving through the murky depths the heroes headed south, discovering some rooms normally occupied by Sahaugin who are downstairs at the arena. They do find one chieftain who they kill quickly, and then a huge chamber full of women which they wisely avoid. Heading back north they stumble upon the vestry and quarters of the priestesses, who they discover in the temple about to engage in Sahaugin eugenics. A huge scrap kicks off with the characters focusing on the clerics, whilst the lizard men tackle the shark (by cunningly trying to get eaten and choke it...). Taking a few lumps, the players slay the priestesses, and bag the loot.

So with some quick healing, they swim further onwards and into a huge pillared chamber and then creeping to the portal into the throne room wherein are the toughest Sahaugin, including Baron, his elite guards, and the high priestess. Oh, and a shark.

A drama is unfolding: two Sahaugin are showing an unearthed stature to the Baron, and in its stony clutches is a glittering trident. As the players watch a robed figure materialises. He wears a mask, like  a Venetian mask with a joker-style leer. With a flourish he pulls loose the trident, is heard to say (through the water) "Ah, Wave, at last." And disappears. 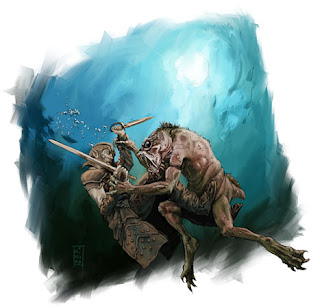 The Baron looks about furiously as to where his newly discovered artefact had gone. And he sees the characters looking equally stunned. An epic scrap follows, with both the four-armed Baron and the pesky priestess proving tough to kill. But, with a few wounds, and a few dead lizardmen, they win! The Barons loot is discovered, and his vile missus is killed on discovery. 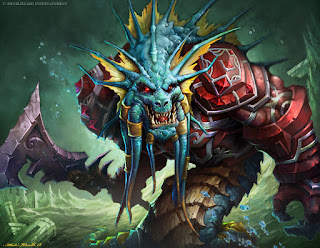 After this climax the adventurers head down and discover a barracks, and rather worryingly several score of Sahaugin pissed about their dead boss. The chase is on, and the characters barely escape the lair with the remaining lizard men, and the marines who had secured level 1. The boat comes to fetch them and they outrun the Sahaugin, returning to Saltmarsh with what info they've gathered and the news that the Sahaugin command are dead. 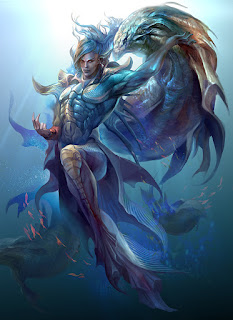 With the reward, treasure, and XP for killing some tough baddies, the characters all increase in level - and with a house in Saltmarsh as a gift, they gain somewhere to rest and recover....

The six characters are doing really well. Charlie's three are tough: Vicdak is a combat monster, now gaining double specialisation (from Unearthed Arcana); Crue is fourth level MU, with a big range of spells that I think Charlie plays a little too cautious, but who'll be rock-hard when he gets to 5th (fireball time); Elangos, although not as tough, now has a Ring of Invisibility, which is a big boost to an assassin.

Evelyn's trio are developing personality-wise. Emelia's thief abilities are a real bonus to the party, and she seems to do well in combat. I can see her being fun for some solo adventures. Loki has also gained a double specialisation level, with his skill being in the longsword. Loren, as a paladin 4 gains some great abilities, and his persona is evolving well. He's got a great AC as befits a righteous Crusader of Pelor. I think the ToEE will test them when they hit the second level and below.

And so onto the next classic... the Temple of Elemental Evil, and more revelations about the mysterious masked sorcerer (and his ultimate link to White Plume Mountain).